Well, at least for me, Lisp is a "Brave new world" 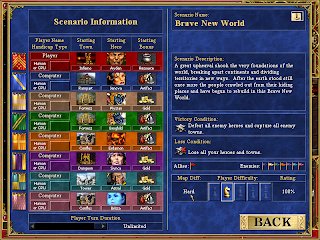 I finally got the urge to learn Lisp after reading Paul Grahams "The Blub Paradox".
I'm surprised to say, "Nothing beats the feeling of accomplishing Hello World".
The last time I felt this was with C (using turbo c). Not sure with Java's hello world though XD. 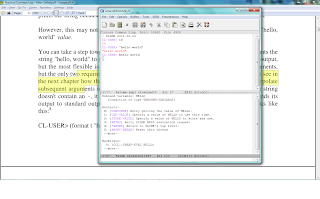 Achieving this is just 2 steps:
1. Download 'Lisp in a box' from http://common-lisp.net/project/lispbox/ and unzip.
2. Run the launcher and type "Hello World".
Posted by thirdy at 7:12 PM No comments: 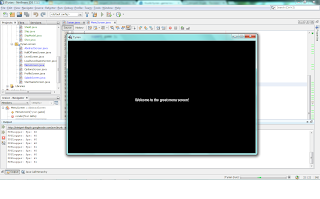 It has been years since I have done game programming. Back then it was J2ME or with Swing using a lot of JPanel. I did attempt to learn Java 3D or those popular game programming libraries like JMonkeyEngine, but nah, all I came up was HelloWorld.

But the wheel of time has turned & now there's LibGDX. It's great, IMO, documentation for beginners is not so great. Luckily I found this blog that has a series of tutorials.

A part of the feature I'm writing is to load multiple regex from a file. The file is simple, each line represents a regular expression.


Now I needed to test my method that uses these regex:


The test data for animals is around 1 million that is stored in DB. For me to be able to test this is to use Groovy's DataSet to loop through the test data. For each iteration, run the detectAnimal method and save to DB. Easy enough.

Now here's the big Gotcha. Below is the Groovy code I used to build my List of regexes. Note that I used this code only for testing purposes.


This essentially breaks all the regexes except the last one: \b(buffalo|tamaraw)\b Debugging this (I used Eclipse) was tricky since '\r' or carriage return is non-printable character.


To make this much more complicated, in the Java code, I have already written the code that loads the config file which uses Apache Commons IO FileUtils. This code was located in a Project wite Utils class which uses a java static block to load config files. Which, honestly, I don't like. Since using static blocks is a bad practice.

Honestly, this might have clouded my judgement of not using this Utils class. Also since Groovy is a shiny new language, so I was excited in using the new & improved File class. But apparently, Groovy's File class does not have readLines as opposed to FileUtils from Apache Commons.

TODO, make this post more readable
Posted by thirdy at 4:20 PM No comments: